Women in Engineering: A day in the life of a Highways England female engineer

On to Women in Engineering Day (23rd June), we spoke to Charlotte Wright, 35, project manager for Highways England – the government company tasked with operating, maintain and improving the country's motorways and main trunk roads talks us through a typical day in her life. 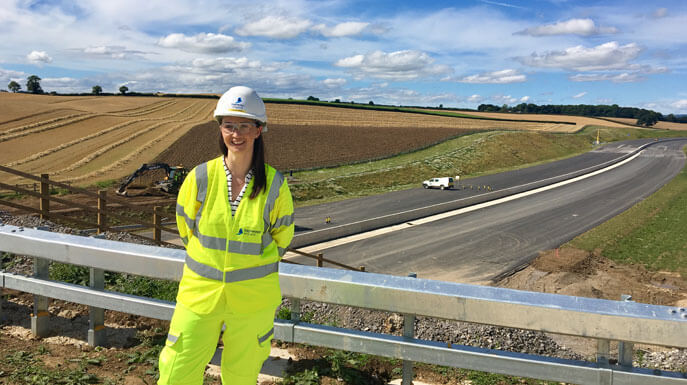 Charlotte has been working within the engineering sector since 2002. She joined Highways England in 2015, and is currently project managing the A1 motorway upgrade in North Yorkshire – an investment of £380 million: a stark increase from the £1m projects she had been delivering.

Having left school at 16, with GCSEs, Charlotte worked for a local solicitors' firm as an office junior. Engineering wasn't immediately on the horizon. But with her dad being a Highway engineer, it has always been part of her life.

It was after landing a job at 19 within a local council highways team, that she started to see a path in engineering opening up. She became a highway technician in 2002 and started studying. In 2011 she achieved a degree in civil engineering, and is now completing her Masters in transportation planning and engineering.

Charlotte tells us more about herself and the job she does:

My alarm goes off…

At 6:30am and I get ready – the hi-viz protective clothing we wear on site doesn't work well with dresses, so trousers are a must. I leave the house at 7.30am to drive to the site, which is about an hour away. During my journey I'm wondering what the day will bring and what's going to come up, such as how's the construction going, and are we on track to open on time.

Working with my senior project manager we are responsible for delivering improvements for road users on time and on budget. We have about 20 people working for us. We're overseeing if the job is being done to the right standard, are we spending money properly and is everything on site safe: for the staff and those driving through the roadworks.

But it's also about feeding back best practice – how can we learn from what we do?

Two years ago, after being a local authority highway engineer for 10 years. It gave me a really good understanding for building roads. But local roads are a little bit different in scale to motorways– so moving to Highways England was a big change for me. The investment is huge! The schemes I worked on before were around £1m, over short periods of time; I'm now responsible for the construction of a project that'll complete at around £380 million and has taken years to construct.

My day is a real mix of being in meetings, planning and dealing with any issues that come up, coupled with being out on site to see how it's running and to talk to staff. If a member of the public gets in touch because they have an issue with the project, I like to get out and have a look myself, and talk to them directly.

I'm not out there doing the physical building work, as this is done by our contractors; but it's so important I understand what they're doing.

I do miss being out there, being a hands-on engineer, but only when it's sunny - not when it's cold North Yorkshire weather!

My most memorable work moment…

When we opened a new section of the 12-mile motorway: it was a brand new piece of construction, and we were also filming it overnight for a TV documentary. It was about 5am in the morning, and I was standing there when the first car drove along it. That was exciting - to see all the hard work come to fruition.

The most memorable achievement within the women in engineering arena…

In November 2016 I became an Incorporated Engineer (IEng). I had to submit a portfolio of evidence and go for an interview with the CIHT (Chartered Institute of Highways and Transportation).

It meant I could, after years of studying, put those four letters after my name. It was recognition, of my knowledge and my abilities as an engineer.

When I got the job in 2002 as a highway technician, my boss was a Chartered Engineer and she was a really good role model. She actually signed off my IEng application last year.

The most challenging part of my job…

Public speaking! An important part of my job is doing broadcast interviews about the project, but it just doesn't come naturally to me – I feel like I lose the ability to string a sentence together. I always get great feedback from our press officers though.

The best part of my job…

I like making things better for people. I revel in being part of the construction of a major bit of infrastructure, that's going to be there for years and years to come – a legacy. I can look at that project, drive on it and say “I was part of this happening”.

At the moment it feels like it's all about my Masters dissertation, but my escape is horse riding. Up until about a year ago I had never been on a horse, now I enjoy riding: it's half an hour of just thinking about that. I find it incredibly therapeutic.

I love going on holiday to Austria too, so to enjoy that experience even more I'm learning German.

My Plan B: Being an artist

Last year I went to see a local artist (Sarah Graham) and I did a painting of a humming bird as part of a class. I got lost in the whole experience. I'm very task driven - I like to start something and finish it. I found this was possible with the painting.